Really surprised by the heat being generated here and the hostility. And for the record, my college girlfriend did the Peace Corps thing and completely agrees with him. The turnover issues Ms. And really, given the financial crisis this country is facing, every government funded entity should be able to withstand close scrutiny and demonstate their effectiveness against some metrics. JFK had a dream. In some ways, the Peace Corps has probably exceeded his wildest hopes, but at age 50 it may be time to rethink its execution strategy. You raise fine points, I just think that the line between accountability and flexibility is blurry.

I agree; you make great points.

That is one of the main reasons why the issue of holding PCVs more accountable in terms of work is such a challenge. I am not implying that PCVs must treat their work like a job. I think talking with locals and helping your host mother are good things that every PCV should be doing.

I just also think that the PCVs should be held to slightly higher standards when it comes to their primary or secondary job, whatever that might be. Are you Taylor Dibbert? The short bio indicated that you were a Volunteer in Guatemala and I did not think you were still serving. If so, I am not quite sure what it is you are saying.

There should be amble records in both countries about what Volunteers have done, how Host Country Nationals evaluated the work; what has been learned and where the focus should be for best results. Did you find such records?

If so, was the information helpful? If you are not the Taylor Dibbert who posted the article, please make that clear! Take care. I, of course, Mr. They were ineffective because in the early 60s, communication took days.

If there were evacuation plans, I was never told of them, also typical of those times. Because my site was in an area that became targeted for the violence that was to mark my host country for generations, I am particularly sensitive to safety measures. I am impressed with the fact that Peace Corps has successfully evacuated whole contingents during host country political emergencies.

If you disagree, I would appreciate hearing your take on how Peace Corps has been able to do that. It a time honored tradition. You have earned the right to join it. However, fundamentally, the organization is not designed for accountability. It is not a totally civil service system. I do think it is a discussion worth having.

Latest on the blog

The legislation created because of the testimony from Peace Corps women will put into law one form of accountability, and is one important reform step. I think because of the unique factors in Peace Corps organization, accountability will have to be accomplished by legislative mandated systems, very difficult to do. However, that too is fraught with political implications. A Volunteer working well with a disenfranchised population may be threatening to an entrenched bureaucracy. Such a contract would spell out mutual rights and responsibilities between Volunteer and the PC agency.

Now, finally, Mr. They just highlight feel good stories. Yes, we all have the best of intentions, but so many volunteers under-perform or at least do not achieve as much as we would have liked to. I thought a novel solution to this would be to require a partial subsidy by the counterpart agency. Also, counterparts should have a hiring process to contract the PCV. To top this off, PC should monitor what successes its volunteers achieve and publish these results openly.

Not to say whether a volunteer is good or bad, but to measure if the programs need to be improved. That review would suggest that you are far more capable of a reasoned analysis than your article here would indicate.

But you attack the safety and security reg, rather than the requirement that Volunteers stay inside for most weekends. I am not sure where you see hostility.

Citing facts to refute generalization or false statements is not hostile. He is a fool to think he will not be challenged for such a stupid, sweeping, and false statement.


I cited the Congressional testimony that refutes his statement. Right now, Mr. Dean, a group of very brave women, who were assault victims during their Peace Corps service, have worked very hard to promote legislation to address very real safety problems. The legislation has bipartisan sponsorship and is supported by thousands of Peace Corps Volunteers, serving as well as returned. It is on the verge of passage. I would urge you and your RPCV girl friend and everyone to contact their Congress delegation and ask them to support this very necessary legislation. I did point out internal contractions in Mr.

I do think that reform is very necessary for the Peace Corps. I would like to see personal service contracts for all Volunteers. I also believe that successful service as a Peace Corps Volunteer should be a prerequisite for any job with the Peace Corps agency. I deplore the number of political appointees running the agency. However, I sense that you are not aware that the unique organization of the Peace Corps, including the staff turnover, is mandated by law, not by bureaucratic fiat.

The organization lacks the power to change itself. Reform must come from Congress. For that to be successful, facts, not opinion, must be the basis for discussion. An agency assessment was ordered by Congress last year. Peace Corps produced such an assessment and it can be found on the Peace Corps government website. However, you should read it before recommending that such an evaluation be done. The secret with peace corps is that many volunteers participate in victim blaming. In this way it is like a cult. Nobody ever talks about that dirty little secret of the PC. It now goes to the House.

The legislation does not limit threats, harassment, or assaults to specific genders, ethnicity, or job titles. The Senate Hearings today focused on reforming the Peace Corps management to make it more responsive to Volunteer input. I hope all of you find this encouraging. I did. I think that the concerns expressed here were echoed in one form or another at the Hearing. Senator Menendez seems sincere and knowledgeable. Something I find very sad is that when Volunteers, serving and returned, talk over time and space, we know our own experience but not that of other Volunteers.

The Truth about the Peace Corps

The Peace Corps has always been a u. Director Aaron S. I kept up with them via email, skype, and blogs.

The impression I got was that while some PCVs were hardworking and dedicated people who shed a lot of sweat in their host nations, there were a lot of volunteers who were basically there to have an adventure first and help people second. More than half of the PCVs I kept in touch with admitted to having very little contact with local people, sticking to the expat and volunteer community whenever possible.

A good friend told me that during the last six months of her tour she was only doing three hours of actual volunteer work a week…the rest of the time was spent watching tv and trying to spend time with a cute PCV in another part of the country. Also I graduated in the middle of the recession, so I know that many of my PCV friends joined in order to avoid being unemployed, rather than a great passion for the work.

So my sample population may be atypical in that regard. But the fact that so many folks back home are reading these PCV blogs or following them on facebook and getting a bad impression should worry the PC leadership. I served in Morocco in Youth Development. All YD volunteers worked with a superviser at a youth center. PEace Corps though has a hard time finding balance between 16 hour work days and having no work to do at all.

Because during PST you will be spending a lot of time with other volunteers because you are doing CBT it is design that way. Also PC leadership monitor these blogs so you are not getting the full picture. You should read the blog post of volunteers that were medically separated, or those who early terminated their service many do this for safety reasons, harassment in site, authorities harassing them in site like military police who think the volunteeer is CIA.

The challenges are many and there are many reasons why volunteers are at site with nothing to do. You do get the super volunteers. Soo when they get there, they are able to easily find counter-parts, they are able to find associations that are willing to cooperate and no one is pulling a knife on them when they are exploring their town and meeting the locals or going door to door with their superviser introducing themselves. In many other peace corps countries. 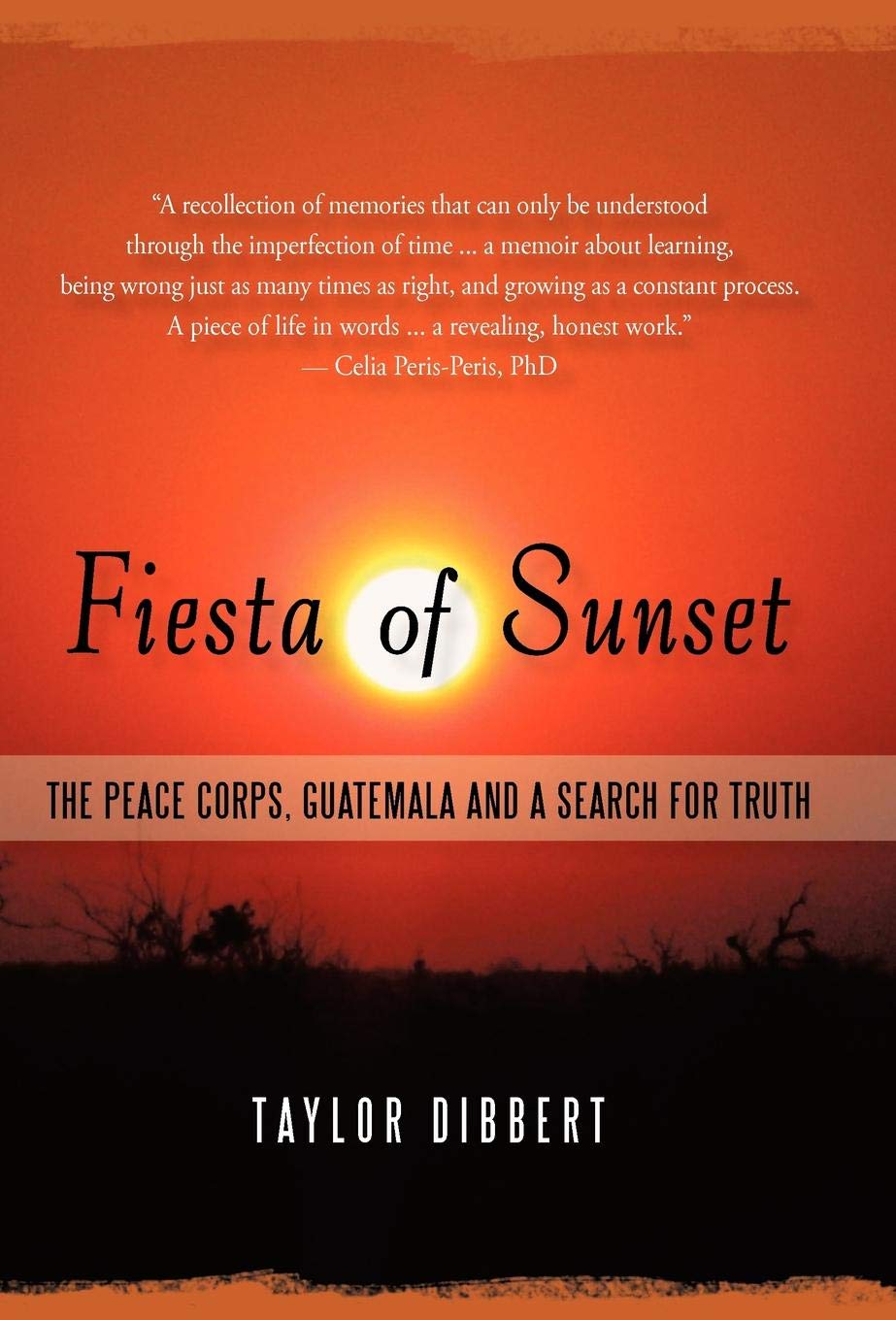 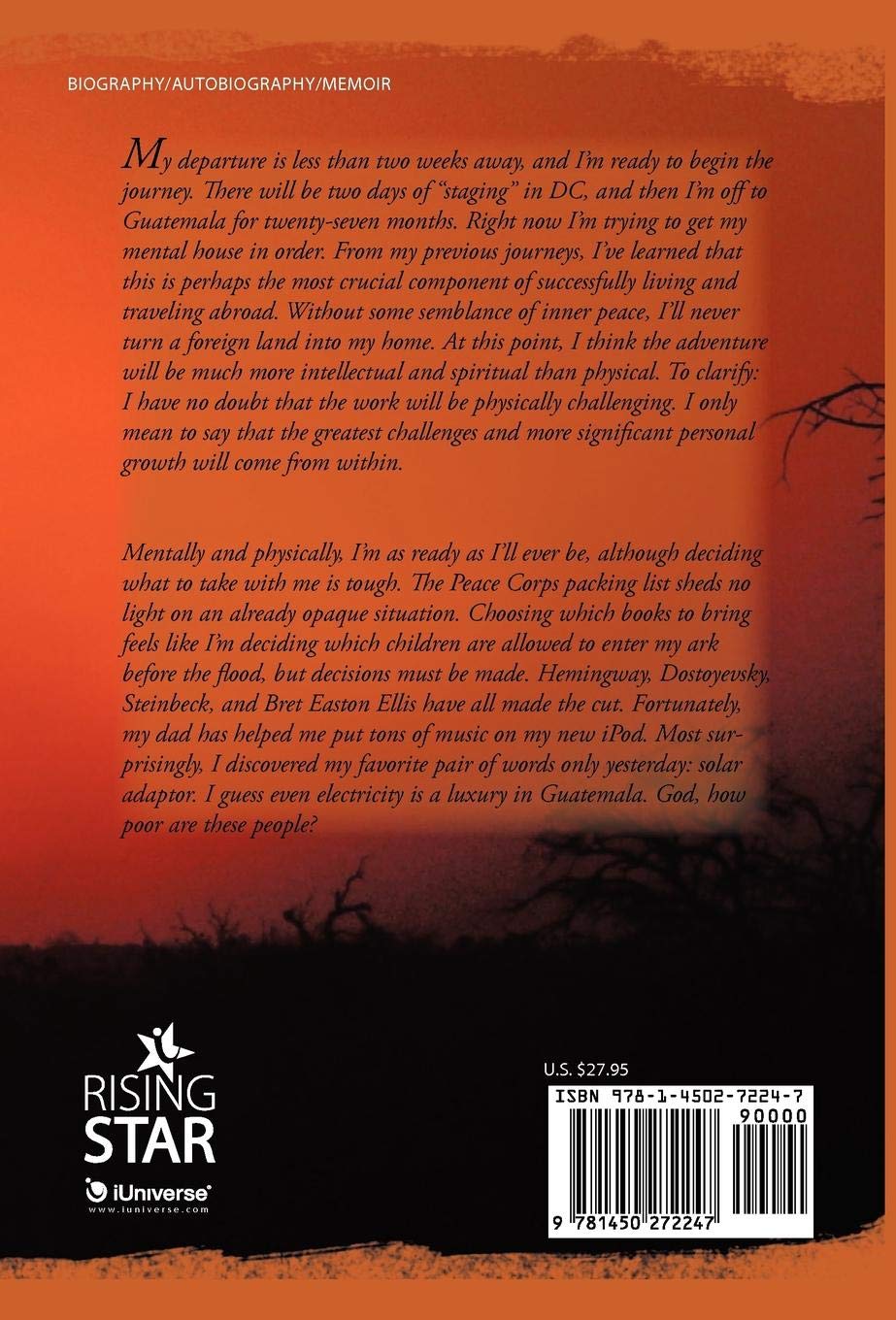 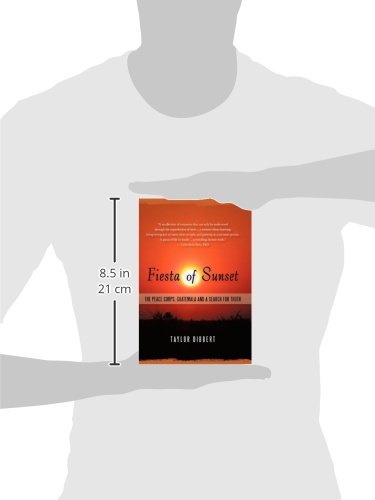 Related Fiesta of Sunset: The Peace Corps, Guatemala and a Search for Truth